Albania has been a major corridor for migrants trying to reach the EU for several years now.

Although media attention has moved away from this issue, the situation still remains serious and many people are still in need of assistance. Caritas Albania has been working in collaboration with the Albanian border and migration police on the border crossing points of Greece, Montenegro and Kosovo, to ensure humane treatment of people on the move, while providing basic assistance in the form of food packages, medical help and asylum applications.

At a national level, October 2018 saw the highest number of refugees as 628 people were registered at the borders and in the Albanian territory. There was a slight decrease during November, December and January. From February to April, the influx reached an average of 600 people per month. Albania lacks the necessary capacity to accommodate refugees and asylum seekers and to provide them with basic services such as food, health care, social services, housing, employment, etc. The local Caritas staff have been doing their best to assist where they can and have remained in contact with the local authorities over this time.  As winter approaches, the need for adequate shelter and warm clothing will become more and more necessary.

Food and other basic services

The Albanian authorities are not adequately prepared to provide food, clothes or other services necessary for the mixed migration flow. Caritas Albania is intensively involved at border crossing points, offering food packages, clothes and medicines, as needed. In particular at the border crossing points in Kukës, Shkodra, Gjirokastra and Korça, Caritas provides substantial support  in the form of accommodation, medical assistance and food. The food parcels include basic products and, in specific cases, additional products such as milk for children or medicines.

Caritas Albania staff has identified 132 persons with specific needs in the regions of Gjirokastra, Korca, Shkodra, Tirana and Kukës during the project implementation. 109 individuals required medical aid and have received first aid supplies. For some of them, Caritas coordinated transport to a local hospital. During the assistance provision, the field coordinators had the possibility to meet and discuss medical needs with people. All the persons are being supported with medicines and analyses when needed.

Friendly spaces and recreational activities at the National Reception Centre

Asylum seekers have the possibility to participate in recreational activities in the centre in the presence of social workers. A lot of materials were delivered to the centre, such as sports materials (bicycles for children of different ages, kick scooters, skateboards, tennis items, soccer balls and goals, basketball items, volleyball items), painting materials (canvas, oil varnishes, paint brushes, pottery wheels) and other items (chess boards, skipping ropes, etc.).

If you want to support the work of Caritas Albania, send your donation to the following bank accounts:

Due to the coronavirus pandemic, Caritas Albania has taken appropriate measures. All non-essential activities and those involving large numbers of people have been postponed. Trips with migrants to public facilities are avoided, unless necessary. Caritas Albania also gives instructions to migrants/refugees on how to behave in and outside different facilities. Since 12 March, around 100 people in Korça and in Gjirokastra are being supported directly by Caritas with food and non-food items. The National Reception Centre for Asylum Seekers in Babrru no longer accepts new arrivals from the border areas. This decision was taken in order to protect the people inside the overcrowded centre and to prevent the spreading of COVID-19.

Additionally, Caritas interrupted its participation in the pre-screening of migrants and refugees. Interpreters do not attend meetings with migrants and refugees anymore either. When there is need for interpretation, it is provided by phone. The Caritas teams working in the border areas are requested by the Border and Migration Police (BMP) to avoid contact with newly arriving persons. The police are currently identifying their needs as well as those of people with specific needs. Caritas then provides support to these persons through the police. Caritas staff is still authorised to be present to monitor the situation. The use of private vehicles is prohibited, but Caritas teams have a special authorisation to continue circulating.

All facilities of the BMP, as well as the Caritas ‘Peace Village’ that hosts migrants and refugees, have been sanitised and disinfected by a specialised company. The cleaning protocol in all BMP facilities and migrant centres was reinforced and is being closely controlled. Staff received trainings on respiratory hygiene, hand washing and social distancing via Skype in collaboration with UNHCR. The cleaning staff of the state centres in Gjirokastra and Kapshtica interrupted their services, but provide hygiene materials so that the migrants and refugees can clean the facilities themselves.

Caritas Albania also adopted new procedures for food distribution, based on the guidelines of the World Food Programme. As a result of the COVID-19 pandemic, there is an unprecedented demand for medical items and medicines to respond to the outbreak. Various requests to procure medical supplies are coming from the government, the BMP and local Caritas teams. For this reason, UNHCR has provided guidance on procurement. Caritas is working at the national level to adapt and to follow these new instructions.

In 2019, about 12,000 persons used Albania as a transit country. This number is not expected to decrease, especially with the dramatic situation currently ongoing at the Greek-Turkish border (read our a statement).

Caritas Albania continues its work with migrants, refugees and asylum seekers in 2020. In only two weeks, in the period between 17 February and 1 March 2020, Caritas Albania assisted 815 persons. Out of these, 651 persons entered Albania for the first time and 144 persons had already been identified one or two times previously at an Albanian border. 102 of them stayed previously in the National Reception Centre for Asylum Seekers in Babrru and received support from Caritas Albania at another border crossing. 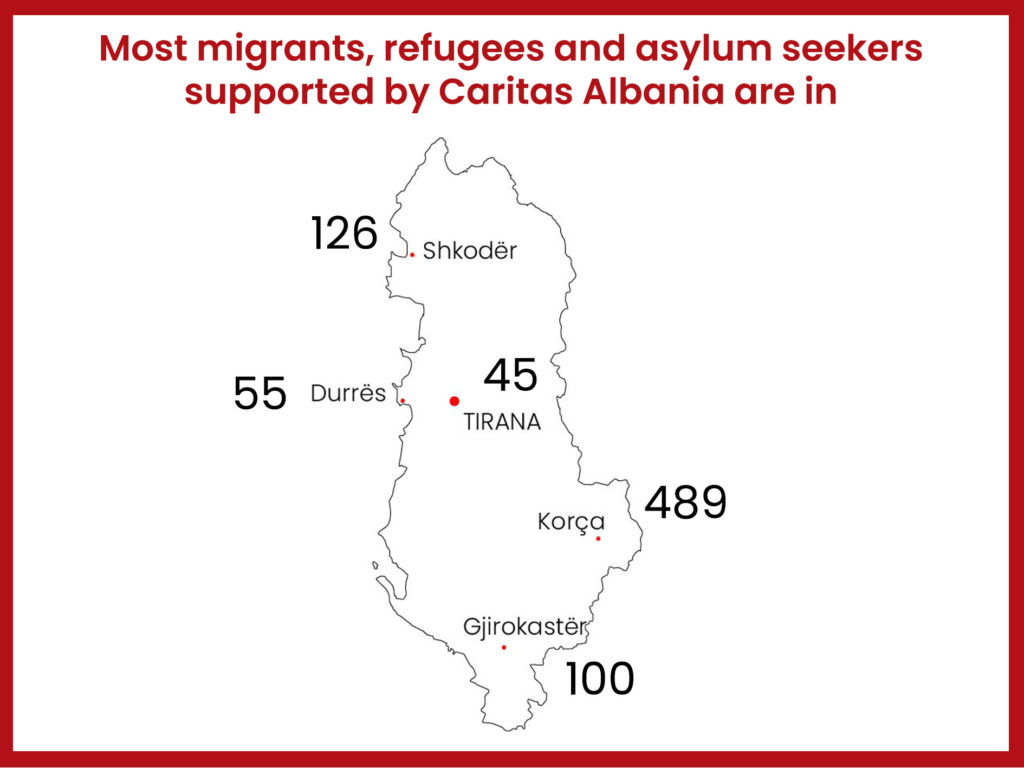 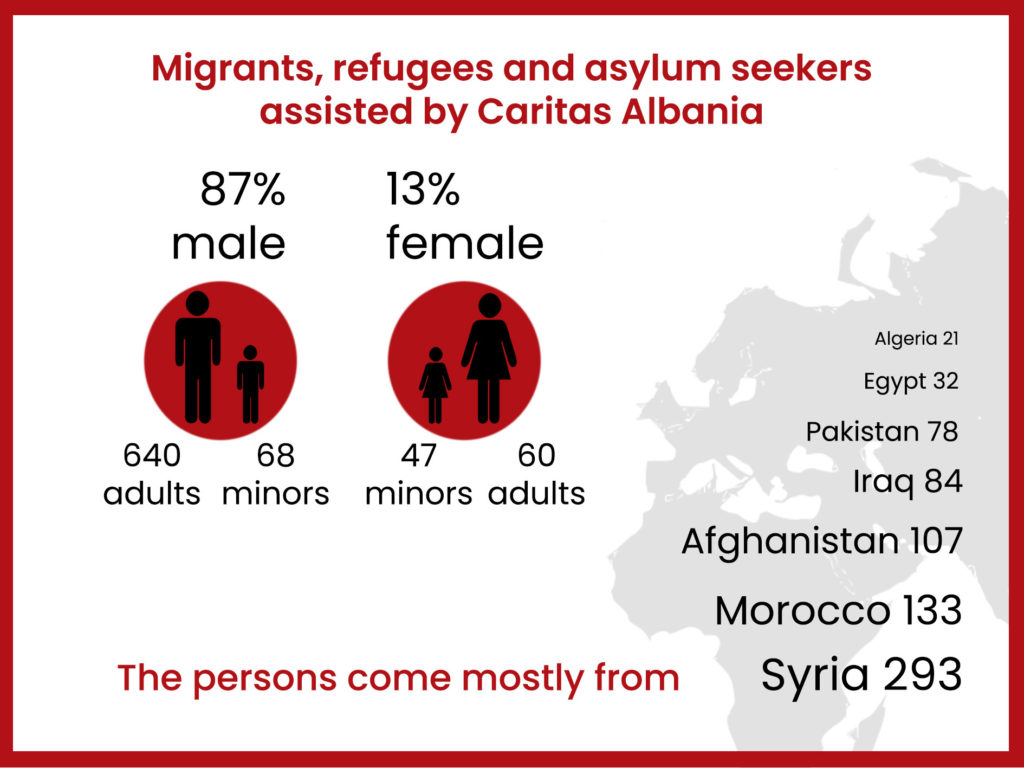 Caritas Albania identified 21 persons with specific needs, including unaccompanied minors and separated children (often youths who have fled alone), persons with medical needs and one person over the age of 60.

Even though these numbers are from a two-week period only, they nevertheless represent the current migration trends in Albania and in the region. They also highlight the importance of Caritas Albania’s work and the necessity to continue working at the borders. Most of the persons arriving at the southern Albanian border are families with children. According to informal information, groups of adult males are stopped at the border and prevented from entering Albanian territory. Many persons arriving in Albania request asylum, even if they do not plan on staying in the country long-term. In the two-week period, 224 persons sought asylum in Albania, out of whom only 184 were sent to the National Reception Centre for Asylum Seekers in Babrru. The others were sent back to Greece. Among them were women and separated children. The Centre in Babrru has reached its maximum capacity and cannot accommodate more persons, thus new arrivals need to stay for two days or more at the border point in Kapshtica.

The number of persons apprehended by the border and migration police also continues to increase in the southern region of Gjirokastra, the capital region of Tirana and the coastal region of Durrës. Since a few months, an increasing number of migrants are trying to reach Italy by the sea.

The Caritas provides food, non-food items (such as underwear, shoes, clothes, hygiene articles) and medical items, as well as translation. It ensures that migrants, refugees and asylum seekers are informed about their rights.

North-western Albania was struck by a strong 6.4-magnitude earthquake on 26 November 2019, killing 51 people. Luckily, this did not impact much Caritas’ Albania’s work with migrants as most of the migrants are located in areas where the earthquake’s impact was low.

From January to December 2019, the Albanian Border and Migration Police detected more than 11,000 migrants and refugees at the Albanian border. Once people enter the country, they receive support from Caritas Albania. This support includes food, hygiene products and other non-food items, such as clothes.

The number of persons entering Albania has increased from month to month, despite the unfavourable weather conditions. During the last months, the trend has reversed as fewer single males and more families have arrived at the border.

Caritas Albania has an effective relationship with the authorities who continue to inform Caritas as soon as they apprehend migrants. This allows Caritas to swiftly provide the assistance needed. The persons apprehended by the Border Police are normally in bad condition; they are tired, their clothes are wet and they are in need of medical assistance. Many children arrive with high temperatures and are directly referred to the national hospitals.

By December 2019, Caritas Albania has provided 1,596 persons with accommodation, the vast majority of whom were housed in Fshati i Paqes in Shkodra and in the Caritas house in Girokastra. 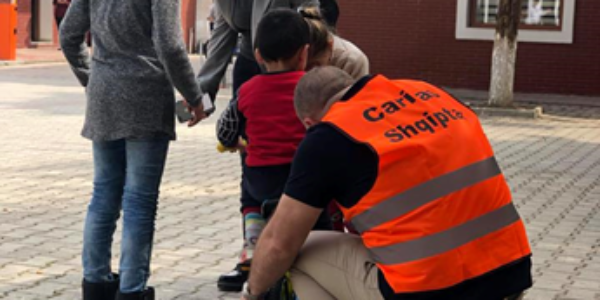 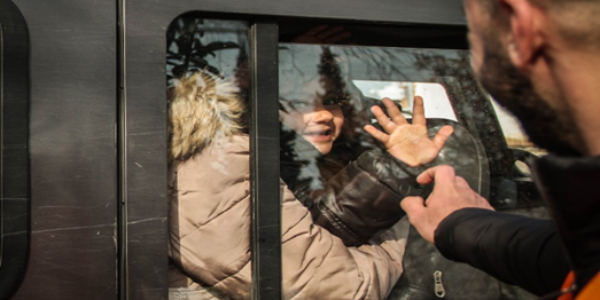 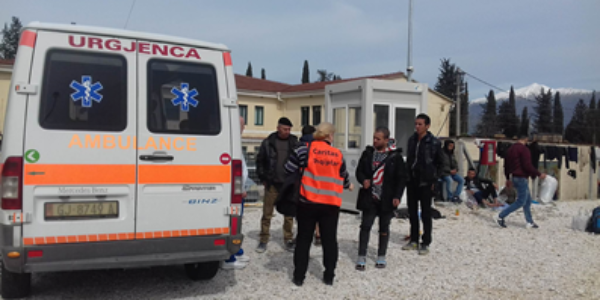 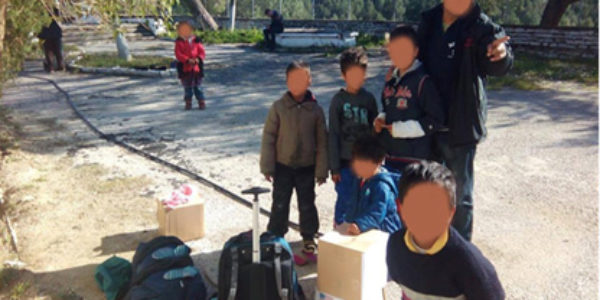 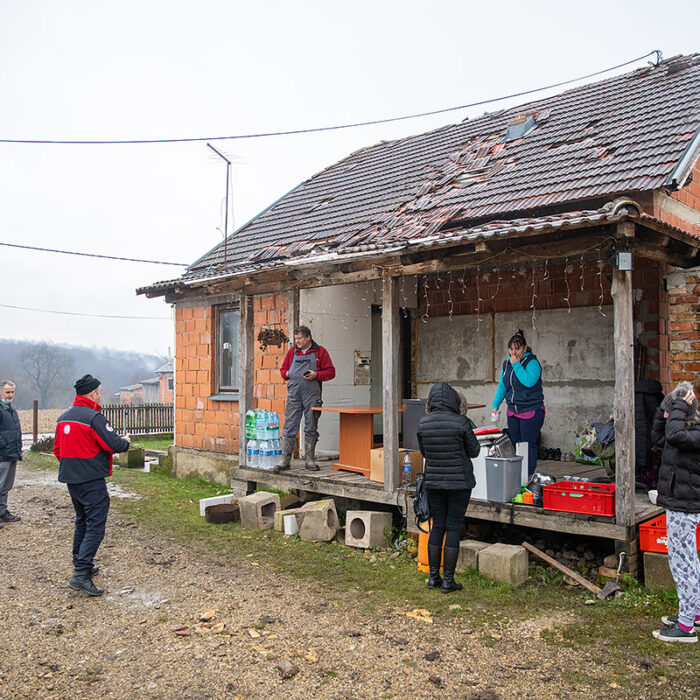 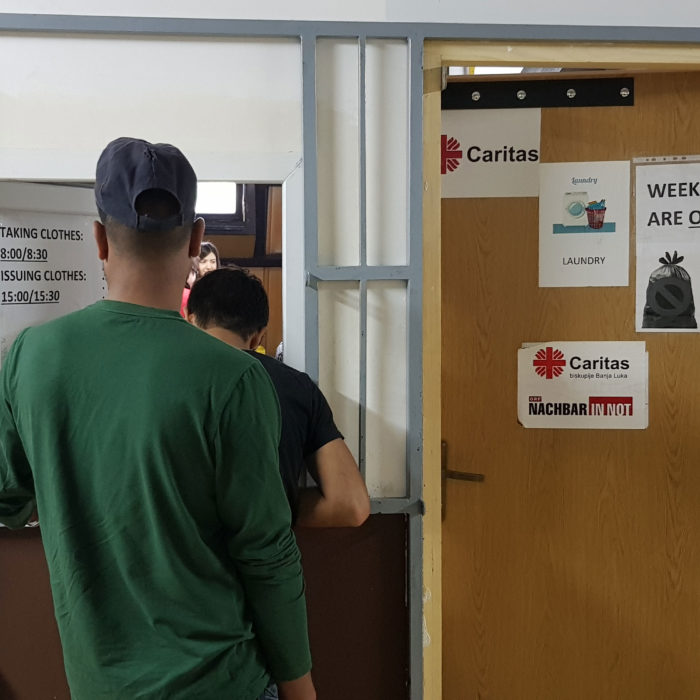 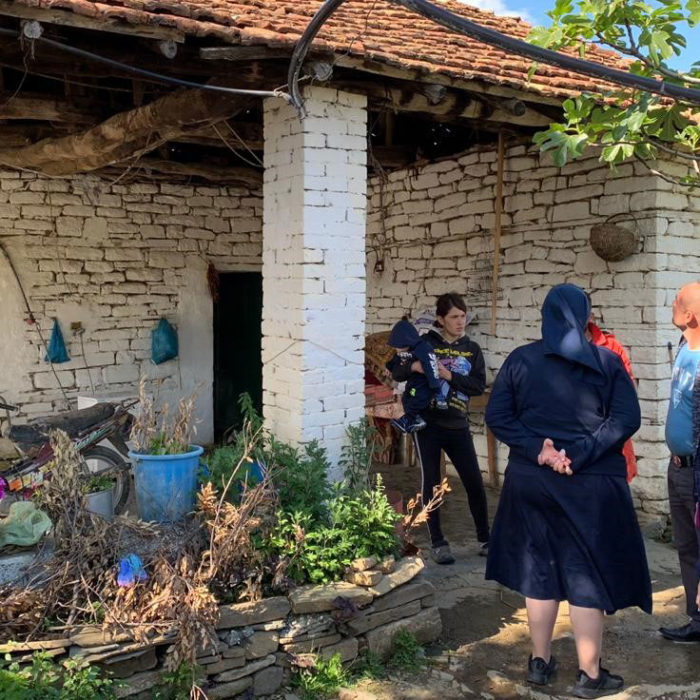